Shahirose Premji, associate professor in the University of Calgary Faculty of Nursing.

Associate professor Shahirose Premji heads to Washington, D.C. this week as one of only four Canadian inductees into fellowship of the American Academy of Nursing (AAN). All 164 nurse leaders selected as its 2016 class of Academy fellows will be honoured at a ceremony during the Academy's annual policy conference, Transforming Health, Driving Policy, which take places Oct. 20-22.

“We are honoured that Dr. Premji has been chosen as one of the Canadian nursing leaders for admittance as a fellow,” says Dianne Tapp, dean, Faculty of Nursing. “It is a testament to her work as a neonatal nurse practitioner and her focus on international newborn health.”

The Academy has more than 2,400 nurse leaders in education, management, practice, policy and research. Fellow selection criteria include evidence of significant contributions to nursing and health care, and sponsorship by two current Academy fellows. Applicants are reviewed by a panel comprised of elected and appointed fellows and selection is based, in part, on the extent the nominee's nursing career has influenced health policies and the health and well-being of all. 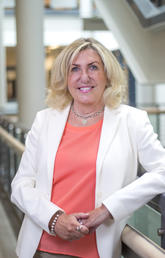