Mackenzie Margetts, president of the Nursing Guys Club, examines a patient in a simulation lab.

Third-year nursing student Mackenzie Margetts is a self-proclaimed go-getter whose goal in high school was to be a surgeon.

“I wanted what any male in high school wants in a career: respect, authority and money,” says Margetts now. “What I didn’t realize is that I can get it all in nursing and I can be ready to go after four years of university.”

Anyone who has seen the 2000 movie Meet the Parents will remember the character of Greg Focker (played by Ben Stiller), a nurse ridiculed by his future father-in-law for his career choice. Although he took and “aced his MCATs” in order to keep his options open, Focker chooses nursing over medicine, proclaiming it was a better fit that gave him “the freedom to work in several different areas of medicine.”

Although Focker is fictional, Margetts says that many of the stereotypes expressed in the film really exist, including the false idea that nursing is an inferior occupation.

“Some people choose nursing because they think it is an ‘easy way’ — a stepping stone — to medicine, but it’s no stone, it’s a flipping boulder. Nursing requires critical thinking, hard work — lots of it — and stamina," he says. "You can’t be successful as a nursing student unless you are 100 per cent committed.”

Margetts is keen to spread the word on his chosen path and doing so by reinvigorating the Nursing Guys Club, co-founded in 2011 by alumnus Tyler Hume, a mentor of Margetts. Hume, who now works on Unit 112 (Neurosurgery) at the Foothills Hospital, started the club to serve as a resource for men in the faculty after a spike in male enrolment that year. Now that he has been a registered nurse (RN) for two years, Hume sees that being a man in a female-dominated profession (only about 7 per cent of Alberta nurses are men), is all about how he presents himself.

“When I first started working, my main concern was educating the public about stereotyping and discrimination,“ says Hume. “Now, it’s all about attitude. When I walk into a patient's room and identify myself as their nurse, I do so in a very confident, professional manner, and as a result, I never seem to have a problem."

Hume says the main thing he tells future nurses like Margetts focuses on normalizing the idea of men in a nursing role.

“When people describe me as a ‘male nurse,’ I know we still have a long way to go to establish gender equality in the profession," he says. "Education at an early age is key to begin the shift toward establishing an equilibrium between men and women in our profession.”

Both Hume and Margetts will participate in the Men in Nursing recruitment event on Nov. 18, held annually in the Faculty of Nursing for prospective male students, where a panel of students and alumni talk about the diversity of a career as a RN.

According to Brenda Toth, manager for the Faculty of Nursing’s undergraduate program, the initiative is important regardless of attendance, which fluctuates between five and 15 men each year.

“It is important for everyone to understand that nursing is a challenging, scientific and diverse career for both men and women. This event gives the guys a chance to ask pointed questions of our male students and our alumni," says Toth. She points out the numbers are on the increase; while the percentage of male admits in the program declined in 2013 and 2014, the numbers for direct entry students rose again in 2015, up to 9.1 per cent from 7.8 per cent in 2014.

For Margetts, the event is a personal opportunity to explain why he is choosing nursing. “Being a physician is a wonderful choice, but it’s not for me. I see a lot more for me in this career than I do in medicine.”

Hume agrees and adds, “I know a lot of my colleagues ended up following in their family members footsteps on their path into the nursing profession. I truly hope that in the future, there are many more young men that look up to their dads, uncles, brothers or cousins and say, ‘I want to be a nurse when I grow up!’ ” 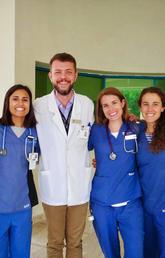