A lasting voice of compassion

Because Dr. Paula Price was a pillar of the Calgary nursing community, a compassionate individual, and a role model to many nurses, we would like to commemorate her life and work as one of UCalgary’s 50 Faces of Nursing. Paula passed away on January 23, 2019.

Paula had a distinguished nursing career in Calgary - from her time at the Holy Cross Hospital in the 1980s and as an instructor at Foothills Hospital School of Nursing in the early 1990s to her 24 years at Mount Royal University, spanning teaching, administrative and mentoring positions, and culminating in her dream role as director of the university’s School of Nursing and Midwifery.

She had a profound impact on the wider nursing community as a role model and great inspiration to her students and colleagues.

Dr. Kathryn King-Shier, PhD, a colleague from the Holy Cross Hospital ICU who knew Paula for more than 30 years, wrote:

“Paula always impressed me as a 'gentle giant.' She was a brilliant clinician and had so many accomplishments and accolades ... but one would never know.

“She was humble and never needed to flaunt her intellect or success. She quietly went about her work and garnered great respect from all who knew her.”

"I worked with Paula, ‘PP’ as we affectionately called her, in the ACCN [Advanced Studies in Critical Care] program at Mount Royal. PP, with others in our program, shared hilarity during the noon hour (by) taking belly dancing classes and doing deep water running. We shared true camaraderie.

“I’ve known Paula in the nursing community since she came to Calgary. Paula has always been a mentor, a scholar to emulate and a gifted leader influential in developing others. (She) continues to inspire me to not only become a better person but a kinder and compassionate nurse.”

During Paula’s funeral service, the priest presiding over the service asked those in attendance to consider as they moved on with their lives, ‘What would Paula do?’

“That really stuck with me,” Kathryn wrote. “I believe when I ask myself that question, I will be more patient, loving and kind while still holding strong to values about our profession.

“Her strength and integrity will be missed by so many.”

Nursing alumna demonstrates her passion for patient and family-centred care 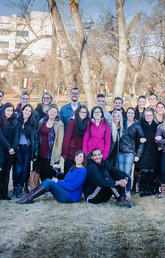